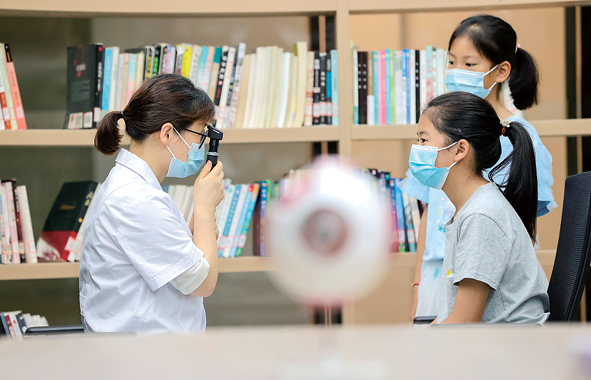 June 6 is the National Eye Care Day. In China, the issue of "small glasses" among children and adolescents has attracted great attention. In fact, teenage myopia is also a worldwide problem. The outbreak of the new crown epidemic has led to a decrease in outdoor activities and an increase in online class hours, making the problem of teenage myopia "exacerbated". How governments, schools, families and other parties work together to protect the eyesight of children and young people has become an important issue in today's world.

The rising rate of myopia among teenagers is common in countries all over the world.

In the United States, a new study based on data from Kaiser Permanente's Southern California pediatric eye exam and 2020 U.S. Census data shows that there are an estimated 19.5 million children with myopia in the United States, with a myopia rate of about 36.1%.

In South Korea, according to the Korean Academy of Ophthalmology, South Korea ranks among the highest in the world in terms of myopia ratio, with 8 out of 10 adolescents being shortsighted.

In China, data released by the National Health Commission of China in July 2021 showed that the overall myopia rate among Chinese children and adolescents in 2020 was 52.7%. The problem of myopia at a younger age is still prominent, and the rate of myopia in primary schools has risen rapidly.

Since the new crown epidemic, strict home isolation measures have led to the reduction of outdoor activities and the increase of online classes with electronic devices, which has brought challenges to the prevention and control of myopia.

In an observational study published in the September 2021 issue of JAMA Ophthalmology, researchers at Sun Yat-Sen University in China compared eye exam data from about 2,000 students in Guangzhou and found that Chinese school-age children are The degree of myopia has increased during the new crown pandemic, and the rate of myopia has increased.

In 2020, 41 percent of men and 57 percent of women in Russia over the age of 15 wore frames or contact lenses, according to Rosstat. In 2021, these figures will rise to 49% and 58%, respectively. Maria Levina, an ophthalmologist at the Eyecraft ophthalmology studio in Russia, believes that the new crown epidemic is undoubtedly one of the reasons for the rise in myopia rates.

South Korea has repeatedly suspended classes due to the epidemic. According to a report by The Korea Times, citing a survey by Kim's Eye Hospital in South Korea, from April 2020 to March 2021, 74.9% of children under the age of 15 who visited this hospital were myopic patients, a year-on-year increase of 6.6%. .

American researchers also said that the new crown epidemic has increased the rate of myopia in children and adolescents in the United States. During school closures, children can only attend classes online, negatively impacting their vision health.

According to the Ecuadorian "Telegraph" in October 2020, citing the results of an ophthalmologist study, after the outbreak, the incidence of myopia in Ecuador increased by 15%. During the epidemic, the excessive use of computers, tablets and mobile phones has led to decreased vision and increased incidence of eye diseases.

According to Frank Schaefer, an expert at the Institute of Ophthalmology at the University of Tübingen in Germany, several studies have shown that children and adolescents have a significantly increased risk of myopia if they use their eyes for a long time in a closed room with a lower brightness than outdoors.

The Japanese Ophthalmologists Association said that reading, writing, watching TV, etc. all require close eye use, which is the main reason for the increase in children's myopia. The increase in the myopia rate among Japanese children in recent years is also related to the premature exposure of children to electronic products such as mobile phones and tablet computers. In general, the modern living environment exacerbates the myopia problem.

In order to prevent myopia, a number of ophthalmologists said that children and adolescents should adhere to scientific eye use, including maintaining correct posture, avoiding eye fatigue, increasing outdoor activities and checking eyesight regularly.

In the UK, doctors regularly conduct vision screenings for school students in accordance with the NHS, and provide parents with a list of signs of vision problems, reminding parents and schools to go to the hospital or eye clinic for vision checks if their children have symptoms. .

According to Russian ophthalmologist Shilova, Russia stipulates that each class in schools should not exceed 45 minutes. In addition, sports such as badminton should be arranged to allow children to change the focus of their eyes by playing ball.

Richard Lindstrom, a visiting professor at the University of Minnesota in the United States, said the most basic measure is behavior modification, ensuring that children are outdoors for 1 to 2 hours a day.

In conclusion, myopia problems in children and adolescents should be screened, diagnosed, intervened and treated early. To deal with the problem of "small glasses", we cannot rely on individuals, families and hospitals alone. The government, schools and society should all participate to form a multi-system and three-dimensional prevention and treatment system. As an article in the British Medical Journal states, eye care professionals, as well as policymakers, educators and parents, need to work collectively to prevent myopia in children and avoid creating a potential public health crisis in vision due to the new crown epidemic.

International Observation | The United States' anti-epidemic chaos has been widely criticized If you stay in the hospital for a long time, it is recommended to wear an N95 mask