Early in the morning, Ouyang Liyi, a resident of Xiasha New Village, Dapeng New District, Shenzhen, carried a large bag of things to Grandma Wu Jin, who lived in the next unit. Since the outbreak of the epidemic, Ouyang Liyi has been serving the 91 year old man as a volunteer in the local community party mass service center. In Xiasha New Village Community, there are 28 elderly people who are alone and widowed. The local government has made proper one-to-one arrangements for these groups who need special care. 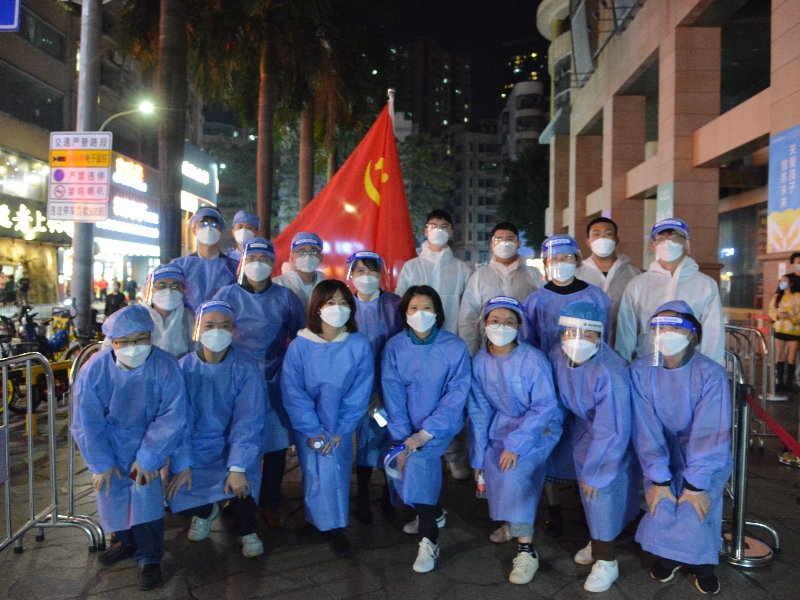 These practices are a microcosm of the current "precision epidemic prevention service" at the grass-roots level in Shenzhen.

Deeply "sinking" the grassroots to practice the original intention

Up to now, Shenzhen has successively sunk 701 aid working groups to grassroots communities, totaling 37000 party members and cadres. In addition, more than 80000 party members, cadres, volunteers and social workers in each community responded to the call to gather at the grass-roots community party mass service center.

There are many foreigners living in Xiasha New Village Community in Dapeng New Area. The local party masses service volunteers have set up a special service group for foreigners. In response to their complaints about the difficulties in getting in and out of the community, they took the initiative to report and coordinate with relevant departments to help them make temporary access cards.

In Nanxian Square, Beizhan Community, Longhua District, dozens of small and micro enterprises were affected by the epidemic and had difficulty operating. They wanted to ask the owners to reduce rent, but failed to do so at first. Municipal and district sinking cadres formed a return to work team, and visited the owner for discussion and communication three times before and after, and the owner finally agreed to reduce the rent of more than 600000 yuan.

A company in Guangming District encountered difficulties such as inconvenient delivery of goods during the resumption of work and production. Guo Shihua, a sinking cadre, learned about the situation and worked out the reporting process of "enterprise temporary delivery" overnight, and coordinated with the regulatory department to provide on-site services to ensure the company's timely delivery. After that, it promoted the establishment of a special docking system of "one enterprise and one member" to quickly and accurately solve the problems encountered by enterprises in resuming work for epidemic prevention.

The reporter learned that Guangming District has implemented the "all inclusive" precise service with the help of the Party Mass Service Center, and each of the 31 district leaders has settled in a grass-roots community. Party members and cadres of district organs have basically sunk, covering all community communities and enterprise parks in the whole district.

After the outbreak of the epidemic, Shenzhen opened a 24-hour special class in the community party and mass service center to accept the demands of the masses to ensure the first response. In addition, 1737 temporary Party organizations were set up at the epidemic prevention front line, and all sunken Party members, cadres, volunteers and social workers were reorganized and assigned under the unified leadership of the community Party committee.

In Guangming Street, Guangming District, more than 860 volunteers wearing uniform red vests were busy in the community every day during the epidemic, taking care of all major and minor matters, and the party emblem in front of them was particularly eye-catching.

Kuma from India lives in Dapeng New District. One day, he saw these volunteers wearing party badges carrying out disinfection and sterilization in the public environment. He was touched by the lack of manpower. He also became a volunteer of community service in Xiasha New Village and became a local "Internet celebrity".

The reporter saw in some communities that the local party masses service center has become the "warm home" of party members and the masses, and many residents actively participate in the activities of the service center.

The layout and functional construction of the party masses service center in Shenzhen have been improved, and some large communities have also extended and established party masses service stations. This is the result of Guangdong's action plan to comprehensively promote the construction of grass-roots organizations of the Party in recent years. At the head of the epidemic, tens of thousands of sinking party members and cadres were able to rely on the position of the Party Mass Service Center to effectively carry out their work. Up to now, Shenzhen has achieved remarkable results in coordinating the two important tasks of "epidemic prevention and control and resumption of production", presenting a good situation.

Fu Shoujie, Deputy Secretary of the Party Working Committee of Gongming Neighborhood, Guangming District, said that the epidemic gave Party members a chance to contact and serve the masses. In the post epidemic era, in the face of new situations and problems, we must start from bit by bit and do everything well for the people.

Zhao Enfeng, a resident of Maluan Street, Pingshan District, said that the volunteers who wear the Party emblem on their chest serve people so attentively that money can't buy them. It is precisely because they have affinity that they have cohesion. Now, as long as the government issues the policy of epidemic prevention and reproduction, it will be supported by the community residents, because everyone is full of confidence.

New Science of Epidemic Prevention | How to choose the right mask for different occasions? Everyone is the first responsible person for their own health